Sometimes referred to by its acronym WtE, waste-to-energy is a way of generating electrical or heat energy from the treatment of waste. By turning waste into energy, we are able to marginally reduce the negative environmental impact of excess waste and also create another marketable product.

What are landfills and why do they still exist?

A landfill is a place where waste is disposed of by burial. Often landfill sites are ex-quarries, valleys or purposely chosen sites that will be formed into a hill. Landfills are carefully constructed sites that are well maintained to ensure they pose as minimal an environmental threat as a large hole full of rubbish can!

The edges of the landfill are often formed of clay, or plastic, to trap in the gases created by the decomposing gases. These gases (generally methane) can be captured and turned into energy. Each day landfills are covered with soil to help them with their decomposition and also to keep the smell to a minimum.

What is the Waste-to-energy process?

Waste is delivered to a WtE facility and stored in a safe bunker until it is ready to be treated. This waste is then sent to a combustion chamber, where combustion is maintained at incredibly high temperatures. The heat caused by this combustion boils water, which produces a high-pressure steam, which in-turn drives a turbine, generating electricity to the local grid.

Odour is controlled by negative pressure and careful management of the buildings and facilities. The ash that is created by the burning of waste is then filtered for metal, which can be recycled. There is a residue created by controlling the odour, and this is mixed with the ash, before being sent to a monofill, which is a special type of landfill that contains only one type of waste. The ash may be sent to landfill and used to cover layers of waste, acting as a replacement for soil.

Gases are collected, filtered, cleaned and then emitted into the atmosphere. Astoundingly, the filtering technologies can pull out more than 90% of the dirty gases. These emissions are controlled using a ‘baghouse’, officially known as a Air Pollution Control Equipment, which is a fabric filter that captures pollutants. 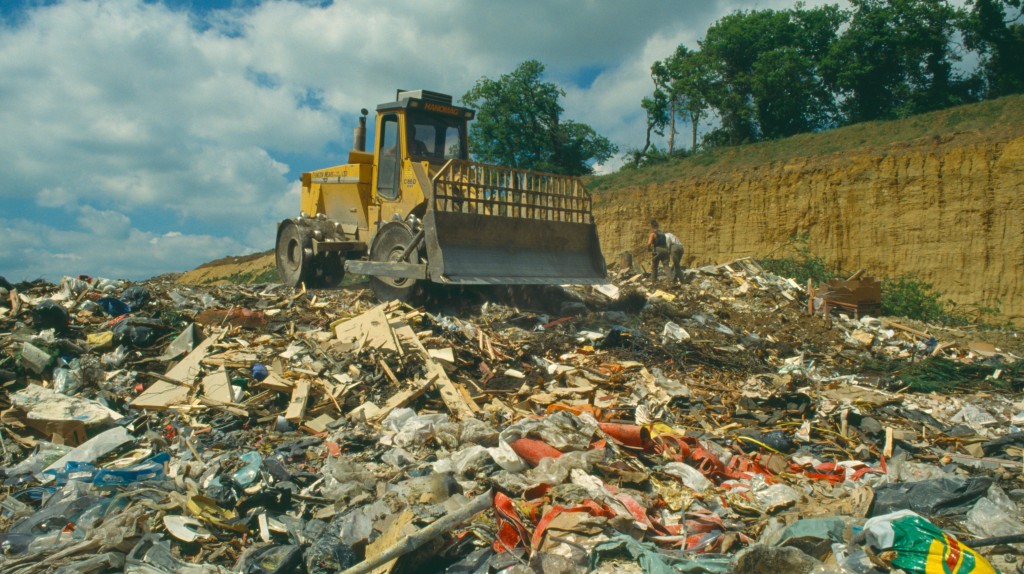 What is the Landfill process?

Landfills are made up of ‘cells’. To build a cell, the base of the landfill is levelled off, sloping in one direction towards an end of corner. The base of the cell is filled with a 1 metre thick layer of solid clay with a two millimeter thick layer of plastic on top. These two layers prevent leachates and liquids from travelling through the cell and into the ground. Older landfills may not have these protectives layers and have been found to poison the earth below, and even some ground-wells. On top of the clay and plastic is a layer called a ‘geo-textile’ which protects the plastic layer from being punctured and helps to drain liquids away (with added help from the slope). The leachates that drain out of the cell are stored in large pipes and tanks.

Waste is driven on to the weighbridge, which weighs the rubbish trucks when they arrive and leave, noting the difference in weight and charging accordingly. The waste is checked to make sure it is not the wrong type, before being driven down to the tipping face, where it is emptied onto the landfill. A heavy landfill compactor is used to squash the waste into as small an area as possible, before a layer of soil is poured on top.

How would you go about using the waste-to-energy route?

It all starts by introducing a waste compactor into your business. By investing in waste compaction equipment and being educated to its proper usage, you will learn to separate waste into different types that it can go down different routes. The different routes that these waste types go down all have different costs and there are huge savings to be made when the environment is prioritised!

As well as the equipment, you’d need to enter into a contract with a waste-to-energy firm, who will collect the waste directly from you and dispose of it most effectively. KOMPAKT can arrange this on your behalf and or even managed the whole process.

What is the difference in carbon footprint?

It’s hard to put into exact figures the difference in carbon footprint between landfill and incineration, because they affect each other, and are both affected by recycling.

Carbon footprint of incineration rises by 5% due to less flammable materials.

If we increased the amount of landfill gas captured by 40% and used it, the carbon footprint of landfills would be halved.

It may be hard to understand how all of these recycling, incineration and landfill figures correlate, but there is a conclusion. The ideal situation for carbon footprint reduction would be to increase recycling of all possible materials, increase incineration and recycle all ferrous metals and ash (into construction), leaving very few materials for landfill.

Are there any other alternatives to landfill?

New technologies and emerging and improving, but the infrastructure to make these effective and global will take decades to build. Here are a few of the top upcoming alternatives to landfill:

Pyrolysis is a process that involves increasing the temperature of waste to around 500˚C in the absence of oxygen. This process astoundingly produces a useful and clean, synthetic gas, a highly-flammable bio-fuel and ash (char). This ash is not as useless as the incinerator ash, as it can undergo further processes to release its carbon energy.

Similar to Pyrolysis, except the heat of gasification is closer to 2000˚C and uses controlled amounts of oxygen and water to produce a highly useful gas called Syngas.

This process is a bit like industrial composting, but minus the oxygen. The lack of oxygen makes the organic material decompose quicker than normal, producing biogas and a solid material called digestate. This method only works for organic material, which is a shame, because it’s highly effective and should be used for all industrial food waste.

Can money be made or saved from waste-to-energy?

Thankfully yes, and we can help you do it!